The two wheels of a cart.

I had heard a while ago that theory and practice in martial arts were like the two wheels of a cart. One without the other just has you turning around in circles.

It is a convenient metaphor which is designed to make you think about the importance of balance and the integration of mind and body. On one hand, too much theory and it all becomes cerebral, and, on the other hand practice without any theoretical back-up has no depth and would fall apart under pressure.

But here’s another take on it, from the world of Yoga.

Supposing the ratio of theory to practice is not 50/50, and it should be more like 1% theory and 99% practice? 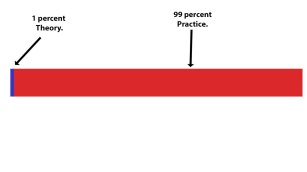 So, for some of the yoga people it’s is very nearly all about doing and not spending so much time thinking about it. I sympathise with this idea, but I feel uneasy about the shrinking of the importance of theory and understanding about what you are doing.

I am sure that I have mentioned in a previous blog post about how the separation of Mind and Body tends to be a very western thing. In eastern thinking the body has an intelligence of its own, over-intellectualisation can be a kind of illness. How many times have we been told, “You’re overthinking it, just do it”? Or, “Don’t think, feel”. 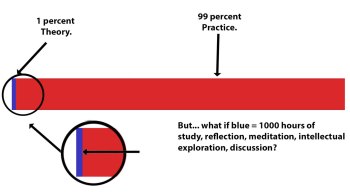 I.e. a huge slice of theory, study, reflection, meditation, intellectual exploration and discussion (still making up only 1%), and an insane amount of physical practice to make up the other 99% to top it off!