Shikukai Karate – Do International was founded F Sugasawa Sensei, its chief instructor. It now has a nucleus of clubs run by dedicated instructors under his guidance. Saturday 6th July saw many of the instructors coming together in Essex to train the children as one group.

It was a real honour for us to have Sugasawa Sensei oversee the day. The children behaved impeccably and were so respectful in all that they said and did. It was amazing to see children from the different clubs working and training together as one.

The day began with a joint Kata training session where different instructors worked with the children on their chosen Kata.

This was followed by a competition, which involved some of our youngest Karateka taking part for the very first time.

The results of the Kata Competition were:

The day culminated in a grading session for children from 9th  Kyu to 5th Kyu.

Again, the children were commended for their positive attitude.

A day of real teamwork. A credit to the instructors and Karateka of Shikukai.

This entry was posted in Juniors.

For the 6th year running we have been honoured to host the Shikukai Karate-Do International winter course presided over by our chief instructor F. Sugasawa Sensei 7th Dan.

We at Shikukai Chelmsford (Shouwa Jyuku 翔和塾) have been surprised as to how the popularity of this annual course has grown over the years; even more so when it became recognised as the official Shikukai winter course. Attendance this year increased even more and we have had to plan for larger venues to cope with the numbers.

This year we had students from as far afield as Hungary, Holland, The Czech Republic and Norway, as well as students from Devon and Yorkshire.

In all this was an opportunity for four days training, kicking off with our regular club night on the Thursday. This was taken by Shouwa Jyuku instructor Tim Shaw 7th Dan and assisted by Steve Thain 4th Dan. The class was centred around some very usable, carefully designed continuous paired drills which incorporated Wado’s characteristic body shifting (Tai Sabaki).

Friday evening’s training was orchestrated by Sugasawa Sensei. Sensei started off with training and grading for the children’s class who are based at the Woodham Walter Junior School and instructed by Sue Dodd. He gave them some very useful kata instruction, particularly on Pinan Sandan. The children taking the examination had been well prepared and inevitably succeeded in their grading. They were a credit to themselves and the care and attention taken by their instructors. 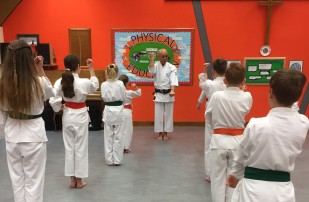 In the senior session Sensei based the first part on the use of the elbows; this naturally led on to the correct application of the elbows in Kake Uke, and then on to paired kumite.

After the training a meal had been organised at the pub across the road, who coped really well with such a large group taking over their dining room.

Saturday training was at the Danbury Sports & Social club. The three hour training began with foundation techniques for everyone and then the class was split three ways with training directed by the senior instructors. We were lucky this year as we not only had Sugasawa Sensei overseeing the classes but also Shikukai seniors, Tim Shaw Sensei, Steve Rawson Sensei, Carol Chatterton Sensei, Richard Barham Sensei and Tim Dixon Sensei. The last half of the class was selected kata for each of the grade groups.

Saturday night was a chance for everyone to get together. We took over a town centre restaurant and for some the revelry went on into the early hours of the morning – others took to their beds at a more sensible time.

The training on Sunday started with an excellent warm-up and stretch by Richard Barham Sensei, Keri Waza in all its variations followed split within grade groups. The second half was dedicated to Kumite, with Dan grades getting some detailed breakdowns from Sugasawa Sensei.

The course ended with a Dan grading. Mark Troman of Shene passed Shodan and Adam Jakab from Hungary passed Nidan. An excellent finish to a very successful weekend. Planning for next years winter course has already started – keep your 2020 diary free.

A huge thank you to the main organisers Sue Dodd and Natalie Hodgson who worked tirelessly to ensure things ran smoothly, as well as the army of people who organised restaurant arrangements, accommodation and airport runs.

This entry was posted in Event, Home, Juniors.