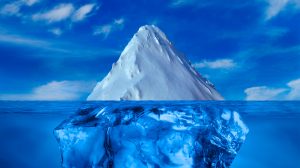 I’m going to try to describe my perception of something that is really quite difficult to pin down. This is just my opinion, but it is based upon things I have seen and experienced at one level or another.

When something is ‘tangible’ it is observable from the outside; when it is ‘intangible’ it is often hidden or difficult to perceive. The tangible could be described as the exterior; while the intangible is the interior. Often we think we understand something based upon what we see is happening on the outside but the real truth of the matter is what is going on in the inside. Or we base our judgements upon prior experience and run the risk of misunderstanding what is really going on – like the story of the blind men and the elephant (Link).

When we are looking at the martial arts, specifically Budo traditions we are observing and experiencing something that is often difficult to grasp.

According to Japanese karate master Ushiro Kenji in his book ‘Karate and Ki’; Japanese arts fall into two categories; those that have an obvious outcome, an end product that is a quantifiable commodity, like the craftsmanship of a Japanese carpenter or a visual artist, swordsmith or potter. And those traditions that have no material outcome, like the Budo master or the traditional Japanese flute player; they are just as valuable but their end products are impossible to lay your hands upon, to weigh and measure, they are more ethereal, their true value is found in the intangible. Often they are part of a living tradition, one that has developed over time, but only survives through the physical human frame.

This ‘physical human frame’ is the instrument, not the finished artefact; there is no actual material artefact. So the martial artist’s body is like a musical instrument, superbly crafted in itself but it’s the output, the workings of the instrument where the real value lies.

The instrument is merely the vehicle for the music. As an example; recent studies on the prestigious violins made in the 18th century by Antonio Stradivarius reveal that there is no real difference between the Stradivarius and a well-made modern violin. Blindfold experts could not tell the difference and even favoured the modern instrument over the Stradivarius. This just goes to prove that we have to be wary of mythologies that accumulate over time.

What is also interesting is that these very rare and expensive violins are given out to world famous musicians who are considered as temporary custodians, this is an acknowledgement of the fleeting, intangible nature of music at the highest level; what is produced cannot be held in your hands, so it is with the highest levels of Budo. The exterior appearance can be caught on film, but the real value is in the intangible. Trust your feelings not your eyes.

This entry was posted in Home and tagged karate, technique, wadoryu.