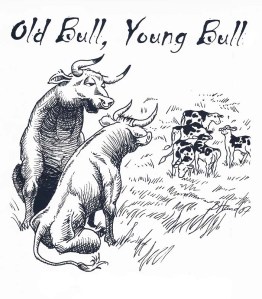 But basically it’s a parable highlighting the benefits of age and experience over youthful enthusiasm.

So… how to relate that to a martial arts situation?

Look around most well established Dojos and you’ll see a range of ages and grades. But it’s not the spread of grades that interests me, it’s the age demographic.

Personally I find that as a rule the more mature person can often be the better student. Yes their flexibility and general physical condition will not be as good as the youngsters, but their life experience and knowledge of their own capabilities tends to be more grounded. Mentally they are generally able to evaluate their developing knowledge and skills in a more mature way, and as long as they are able to ‘empty their cup’, their capacity to digest the more complex ideas is greater than most people half their age. For Wado this is a great advantage. The late Reg Kear described Wado Ryu as ‘a thinking man’s karate system’, and the more you climb the tree the more there is to take on board. Not that we should get carried away with the cerebral aspect of what goes on in a Wado Dojo, because it’s no good just having it in your head, you have to be able to physically do it. The intellectual and the physical in Wado are like two wheels on an axle; one without the other would make forward motion impossible.

I remember in the long distant past a particular Sensei criticizing another Sensei’s karate as ‘old man’s karate’, I didn’t buy it then and I don’t buy it now. But I believe there is a maturity in karate practice.

A 5th Dan’s Pinan Yodan should look quite different than one performed by a 1st Dan. As long as the mature karateka has kept their training consistent and not wrecked their body through silly training methods they have the capacity to work towards the higher ground.

But what about the youngster?

Twenty year olds should train and fight like twenty year olds, not like fifty or sixty year olds. All experienced Sensei should see this and create training opportunities that are age-appropriate. I always think of my cat and what he taught me. When he was a kitten he would frantically climb the curtains. Why the curtains, there’s nothing up there, I wondered? Answer; because he’s a kitten, a fizzing ball of pent up energy looking for an outlet. I ask all the senior experienced instructors; what were you like when you were twenty?

This entry was posted in Home and tagged karate, shikukai, wadoryu.