‘Through a Glass Darkly’. 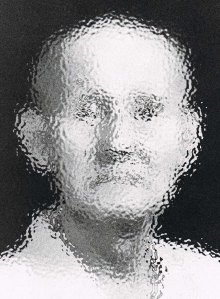 For more years than I would care to remember I have often wondered if what we now do today in Wado Dojos is a true reflection of what the founder Ohtsuka Hironori intended?

I did once see the late founder, and watched him demonstrate his art. It was Crystal Palace 1975; I was only a year into my training and competing in the UKKW Nationals. The audience waited in reverential silence as the elderly master assisted by his son gave the familiar display he always did in his later years. However, this one was different.

There was an error in the well-rehearsed display which resulted in Ohtsuka Sensei fractionally leaving his hand in the path of a descending katana blade – the result was a wound which many of us did not see, until tiny drops of blood appeared on his otherwise perfect white keikogi top. Ohtsuka Sensei seemed untroubled and carried on with the demonstration. First aid assistance was given to the old master at the end of the performance and he seemed unfazed, almost amused.

From the mid 70’s onwards I spent many hours working in the Dojo with Japanese masters all doing Wado Ryu karate. But there were differences; even contradictions.

It took a long time for me to realise that through these differences I was possibly getting a glimpse of the real Ohtsuka. It was like looking at him through a different set of lenses, with degrees of refraction and distortion.

This was frustrating in a way, a bit like trying to identify someone by their image seen through opaque bathroom glass; as I shifted my viewpoint ever so slightly the image distorted and changed. I struggled to make sense of it. But it was more complex even than that. The late master always said that Wado was a work in progress, and those with capacities and knowledge greater than mine continued to hone and refine the art; the ground was shifting and the lens was shifting as well.

Koryu martial artist Ellis Amdur said that success in the martial arts was easy…. All you had to do is pay attention! I think he is right, but I would also add a couple of things.

First you have to empty your cup; and secondly you have to be prepared to be hard on yourself and try to bypass a tendency towards observer bias, and that very human weakness described by psychologists as ‘cognitive dissonance’. Meaning; when confronted with anything that contradicts what we think we have already established we filter out the contradictions and cling to those aspects that we feel we already know. That is not really ‘paying attention’.

I learned a valuable lesson on this when acting as Uke for Ohtsuka Hironori II over ten years ago. On that occasion I experienced the full weight of his Kote Gaeshi and it came as a genuine surprise and painful shock! At the time I tried to work out what he had done and developed my own theory based on previous knowledge. It was only recently that I figured out what had really happened and how far my original theory was out – until another theory comes along anyway.

This entry was posted in Hironori Ohtsuka, Home.