I wanted to share a particular approach I use to explaining an aspect of taisabaki.

For any non-Wado person reading this, the Wado understanding of ‘taisabaki’ is very distinctive from how other schools of Japanese karate interpret it.

‘Taisabaki’ is most conveniently translated as ‘body management’. Shotokan have their way of using taisabaki, but it is a very broad brush approach – in Shotokan anything that gets you out of the way or/and in position to counterstrike, can be classified as taisabaki.

But Wado’s approach is to sail dangerously close to the wind, to dice with danger and evade by the narrowest of margins. Some might say by no margin whatsoever; because what is often viewed from the outside looks so completely suicidal; like two forces seemingly competing for the same space. But that is Wado taisabaki – body management that allows you to flow.

There are some useful ways of into working with Wado taisabaki.

I have two analogies I use when teaching.
One is to say that you must become like water; if you foolishly try to punch water it just yields, and in your efforts you end up getting splashed.

Another model I use is that you should try to become like the human revolving door; like a Charlie Chaplin comedy classic; as one side is pushed the other side swings round and slaps you in the chops. Clearly this is the physical model of In-Yo, Yin Yang, positive negative working to harmonise, all mutually cooperative.

A simple exercise.
Stand square with a partner, both in natural stance facing each other; have one side place the right hand on the partner’s left shoulder and push. The person being pushed absorbs the energy so that the solidity that the person pushing was expecting to meet just disappears – the result may well be that with the resistance gone they will be over-extended and could lurch forward, which is a good result in itself. 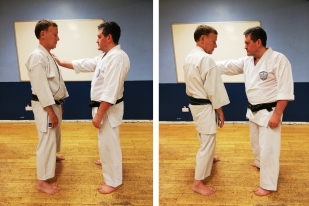 Next, the person being pushed could try harnessing the energy that is being supplied by their partner and feed off it by activating the other side of their body, the right side using the fist and arm and also causing the other person to lurch into it, thus requiring even less energy because the forward momentum amplifies the impact.

To make it more relevant, the person doing the pushing could move their contact point incrementally towards the centre line (much more realistic) forcing the person being pushed to concentrate on their centreline and pivoting subtly around it. Obviously, as a practice this can be developed.

However, an interesting problem occurs when the person being pushed abandons the parallel position of natural stance and adopts a stance with either left leg forward or right leg forward. Suddenly the position of the legs as related to mobility and stability becomes an issue– which way would your legs need to move to support the evasive movement?

One way gives you a neat application of nagashizuki, i.e. the front leg just pivots on the spot while the back leg has to move to support the rotation – to all intents and purposes it is a classical nagashizuki.

But what if you decided to rotate your body the other way? If you respond to that push or punch by rotating only one way you become awfully predictable, so I describe that nagashi movement as ‘heads’ and therefore there must be a ‘tails’.

The ‘tails’ movement is to rotate the other way, but that requires your front leg to do all the movement, which is a movement most Wadoka know, i.e. the second movement of Kihon Gumite Ipponme. In reality the first one is a Jun hip, while the second one is a gyaku hip, this is the best excuse (if you ever needed one) to explore junzuki and gyakuzuki. 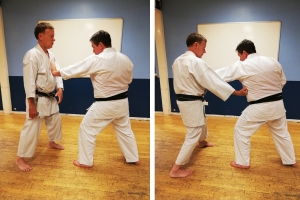 Of course there are many ways of exploring taisabaki, and the more you get into it the more complex it can become.

It truly is three-dimensional, involving so many different interconnecting principles, including aspects of creating space, manipulating timings and psychological leading. The exploration goes on and on, but at its heart is something very very simple – like water flowing around a rock, or a primitive rustic Japanese waterwheel – or even a build-up of snow slipping off the branches of a willow tree.

One thought on “Technical Article – Taisabaki, (Heads and Tails).”