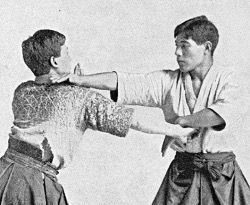 I recently watched a YouTube video which was focussed upon the sanitisation of old style Jujutsu techniques that were cleaned up to make them safe for competitive Judo. Throws and techniques which were originally designed to break limbs and annihilate the attacker in dramatic and brutal ways were changed to enable freeform Judo randori where protagonists could bounce back and keep the flow going.

This inspired me to review techniques in Wado, some of which I believe went through a similar process.

We know that the founder of Wado Ryu Karate, Otsuka Sensei had his origins in Koryu Jujutsu and that Wado was crafted out of this same Koryu base; Wado is certainly still considered as a continuation of the Japanese Budo tradition. Koryu Jujutsu in particular had historically developed a reputation as an antiquated form of brutality which was not compatible with an agenda developed by modernisers like the founder of Judo Kano Jigoro.

To set the context; Wado went through many transformations, and even though quite elderly Otsuka Sensei was still reforming and developing Wado Ryu throughout his long life; a project that was continued through subsequent generations of the Otsuka family.

But how much has Wado allowed itself to be sanitised? Did we lose something along the way? Was Wado de-fanged, did it have its claws clipped? And, if it has, where is the evidence?

But beyond that – does it matter? The loss of these dangerous aspects may well be a moot point; the development of Wado may well have bigger fishes to fry, and this particular issue may just be a distraction from a much larger agenda.

However, to my mind it’s still worth considering.

First of all, I am reminded of a discussion I had with another instructor regarding the craziness of the practice of the Tanto Dori. Thinking back to when these knife defence techniques were part of the Dan grading syllabus, nobody seemed to care what kind of blade you pulled out of your kit bag; blunted pieces of stick, to razor-sharp WW2 bayonets, in fact there seemed to be a badge of honour based upon how sharp and dangerous was your Tanto! We laughed about how such practices would be looked at in today’s politically correct, health and safety environment.

In Judo there are the Kinshi Waza, the banned techniques; these include. Kani Basami (Crab Claw scissors), Ashi Garami (Entangled leg lock), Do Jime (Trunk strangle), Kawazu Gake (One leg entanglement). These are the techniques that the authorities decided were more likely to cause injury, so not necessarily banned because of their viciousness, more their proclivity to cause accidental damage.

Within Wado undoubtedly some techniques were ‘cleaned up’, even within my time.

I can think of at least fifteen techniques, most of which existed inside the established paired kata which were ‘made safe’. Sometimes this came out of trial and error, i.e. the Japanese Sensei saw too much damage incurred by over-enthusiastic students, so decided to soften the technique to minimise injury. Others were implied techniques, e.g. ‘if this technique were to be taken through to this position it would result in significant damage’. Some of these techniques were hidden; you would struggle to spot them if they weren’t explained to you. In some cases the ‘brutal’ part of the technique was actually easier to execute than the so-called ‘cleaned up’ version, but this latter version remained closer to the practice of Wado principles; a contradiction….maybe, maybe not.

A variation on Kumite Gata. The body is ‘scissored’ apart; this is combined with a leg action that completely takes away the base. It is almost impossible to practice this technique safely.

I think that most people are aware that some throwing techniques were designed so that a successful breakfall (Ukemi) would be extremely difficult or even impossible, resulting in damage that you would never recover from; not something to dwell on lightly. (A prime example in Wado is the technique known as Kinu Katsugi, which we now practice in a way that enables uke to land relatively safely). 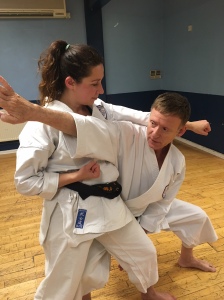 This Ohyo Gumite technique is very effective on its own, but another variation involving standing up from this position would result in Uke being dropped to the floor with very little chance of being able to protect themself.
Right, Suzuki Sensei showing the ‘stand up’ associated with this technique.*

There are other Wado techniques which on the outside look incredibly dangerous but are sometimes so wrapped up in misunderstood formalism that the accepted coup de grace becomes a merely academic endeavour (works well on paper but could you make it do the job?). Usually this is because of a misunderstanding of the mechanism of the technique itself, or the mechanism of ‘kata’ and how the teaching model actually functions.

I remember Suzuki Sensei sometimes held ‘closed-door’ sessions, you had to be above a certain grade to participate and no spectators were allowed. I attended some of these and the best I can describe them was that they involved what some would think of as ‘dirty tricks’, but very effective fighting techniques which would really damage your opponent.

To reiterate; while it is interesting to speculate on these matters, compared to the other complexities of Wado they could be looked upon as a mere side-show, after all, just the fundamentals take a lifetime to get your head round, never mind all of this.

But beyond that – does it matter? The loss of these dangerous aspects may well be a moot point; the development of Wado may well have bigger fishes to fry, and this particular issue may just be a distraction from a much larger agenda.

I think this is an interesting point and one I have thought about for a long time – and ultimately having been completely honest with myself come to a conclusion that was not particularly satisfying.

As a 7th Dan, having dedicated a large part of your life to karate, do you subscribe to a belief that your training primarily equips you with martial skills to be properly used in a self defense / combat scenario or do you believe the training is primarily movements, akin to dance, through which you are seeking to attain some sort of zen mastery of yourself? (Think Zen and the Art of Archery).

I find the latter idea more congruent with our modern lives and society but find few martial art practitioners who have spent a lifetime training prepared to admit that if they got into a bar fight on a Friday night with a thug that they would most likely get hammered.

Thank you Ian for your thoughts, it’s always nice to have direct feedback (makes me think my efforts are not being ignored).

What I meant by ‘the development of Wado may well have bigger fishes to fry, and this particular may just be a distraction from a much larger agenda’ was not referring to anything Zen or psycho-spiritual; it was that what is generally presented as Wado is really just the tip of a very large iceberg. The physical side of Wado is very complex and the principles of training and managing the body so that you can work effectively takes a lot of years and effort. Of course a very basic diet of punch, kick, block has a lot of practical merits and leads to a certain level of physical prowess, but Wado is so much bigger than that. These aspects are not explored by piling up more and more exotic techniques. Nearly 45 years of Wado has taught me how little I actually know, but I am still excited by the areas I don’t know and for me I feel it is unfolding all the time – I am still very excited about Wado.

The bar fight scenario – unfortunately to get to the bones behind this issue there are so many obstacles. Without going into details I will list just a few: Firstly, anyone who has been in these scenarios will tell you how chaotic they can be; the best you can train for is to try and mitigate the randomness and chaos and try and hedge your bets. Secondly; it’s not the style, it’s the person. Third, if that’s what people want a good physical level can be achieved in a very short period of time, just train for that and that alone (but still you have to account for randomness and serendipity). Fourth – a massive amount of success is on mind-set, you can have all the techniques in the world and have it all fall apart if your mind is not able to make that particular mode. Fifth – there’s a toxic cocktail of movie-based fantasy and genuine fear and paranoia, they are like the evil twins of masculinity which martial arts ‘businesses’ ruthlessly exploit.
Tim

Thanks for posting this article, which was randomly popped into my news feed – turns out the algorithm gets it right sometimes!

The sanitisation argument is an interesting one, firstly I seem to remember Funakoshi changed a lot of kata to remove ‘dangerous’ techniques and make Karate more palatable for growth in Japan. As he was a school teacher (as was Kano, I think) his concern was that kids shouldn’t be eye gouging each other at playtime. I believe jujutsu had a ‘thuggish’ reputation in Japan at the time, so maybe these modernisers were trying to clean it up / differenciate their martial art. Perhaps this applies to other pioneers at that time, but my knowledge is really not that extensive.

Secondly, and I’m really not having a go here, might sanitisation be a process that makes a martial art more effective, not less? What I mean is that by taking out techniques ‘too deadly’ to practice in full-blodded sparring against a resisting opponent, the ‘de-fanged’ practitioner actually has frequent experience of making their techniques work in an unco-operative, chaotic environment that someone with a untested deadlier techniques lacks? Beyond the self defence benefits of combat-alike, might that also entail emotional and mental benefits of facing pain, fear, doubt, chaos etc in a way that co-operative partner practice may lack?

Lastly I hope not too many people were killed during dan grade exams. It seems a shame to put in all that training and get run through with a bayonet when the last guy only had to face a rolled up newspaper!

Thank you Niall, you make some good points. I think it’s swings and roundabouts really, more complicated than my blog post perhaps did it justice. Maybe it is an area I will revisit.
The bayonet experiences sure focussed the mind 🙂