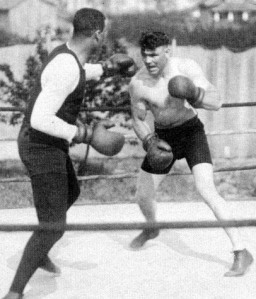 Over many years I have experimented with numerous different forms of training for fighting. Not all of it was applicable to Shiai (contest) fighting, although quite a lot of it was. Let me be clear, all of Wado training is about ‘fighting’, in the broadest terms; but what I want to discuss here is very much about the modern ‘goal orientated’ western model of training, as opposed to an East Asian ‘process orientated’ approach – there is a difference; one that is crucial in understanding the methodology of the traditional forms of the martial arts; but maybe that is for another blog post.

Initially I acted as my own guinea pig (I think we all do). In the early days I didn’t get any formal training, outside of a tacit implication that you have to apply what you are learning in the more formal elements of Dojo training, but bridging that gap was never going to be easy; the gulf between formal Ohyo Gumite and being faced with a big guy wanting to go bare knuckles with you was too huge a leap to make; so instinct had to kick in, and then from instinct came creativity.

There is an assumption that in terms of weaponry you go with what you have got – two arms, two legs. How many times have I heard that one before, (‘After all, we are only dealing with two arms and two legs’), if life were only that simple. But not everyone can deliver on equal terms; if your flexibility is poor your kicks are going to be your weak points; if you are not blessed with a high level of fast twitch muscle fibres you are going to struggle with reactions against a skilled opponent; it could be limb length, it could be size (not always an advantage) or many of the other variables.

But creativity generates ideas; this should be your experimental zone, yes you should have your go-to, tried and trusted techniques but it is the creative/experimental zone that keeps you moving forward as a martial artist.

I sometimes use a simplistic military analogy; imagine that your tried and trusted techniques are like your front line troops; reliable well trained and seasoned by experience; but behind those are subsequent ranks of less experienced troops (techniques), these can be used against weaker opponents, or where the risks are not so high, and eventually, over time they also become your front line techniques/troops. And so, as the ranks go back, you end up with your reserves. These ‘reserves’ are your experimental zone; a whole training camp of ideas, sometimes extremely risky in combat, large portions of them doomed to failure, but, nevertheless, a real testing ground, a crucible of creativity.

It is important that you review, evaluate and build your repertoire. In the Book of Five Rings (1645) Musashi Miyamoto says, “When you sacrifice your life, you must make fullest use of your weaponry. It is false not to do so, and to die with a weapon yet undrawn.” It’s an extreme and interesting model, written by a man so far removed from our modern existence as to be almost on another planet. (I have an allergy towards ‘Warrior quotes’ hijacked by armchair ‘warriors’ or martial arts fantasists), but when it is boiled down to the current theme it applies quite neatly.

Your repertoire is your catalogue of techniques; sometimes these are set-pieces, the types of moves that sucker your opponent into a position he doesn’t want to be in giving you the opportunity to spring the trap. In a way you have to have your whole catalogue at your fingertips; to not pull out the appropriate technique when it’s really needed links with what Musashi said, you must always ‘make the fullest use of your weaponry’.

Another aspect goes beyond the ‘set-piece’, this is when you really get your stuff together and are drawing directly from the root of your training. Techniques that come from that area are more inclined to be threaded into the way you solve the problems the opponent is presenting you with; how your timing operates, how your body meshes with your opponent’s movements, how much energy is deployed to deal with the opponent, all of those and more.

But where is it stored, where does it come from? I have been doing a lot of thinking about this recently. One writer on martial arts said that he thinks of the body as another brain; it stores up knowledge and when it is well trained it delivers what it needs to deliver much faster than a ‘brain-calculated’ response can. This is similar to when musicians build up ‘muscle memory’ to play their instruments instinctively, in some cases they just respond to the groove. Jazz musician Miles Davis said, “It’s not the note you play that’s the wrong note – it’s the note you play afterwards that makes it right or wrong.” All sorts of meaning can be taken from that one quote, particularly when it is applied to fighting.

As for the question on where or how it is stored; I again will use a musical example. Mark Springer is a contemporary pianist who specialises in giving completely unrehearsed improvised performances to packed audiences. How he warms up for this he explained in an interview, “I cram every conceivable thing I can into my head, which is slightly mad; I’m shoving in bits of Bach, bits of Schubert but when I’m playing [warming up] I’m cramming in all of this stuff with the express purpose of absolutely not playing any of it when I go out on to that stage”, to me this is an acknowledgement that Springer is drawing aspects of his inner catalogue and in the heat of the moment is pulling out melodic interpretations which are appropriate to that moment in time – this is what the so-called ‘instinctive fighter’ does.

This entry was posted in Home.